DEPTH AND SYNIK ARE SOULAR RAYZE AND THIS IS ODYSSEY! 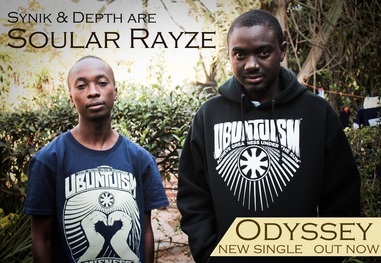 Odyssey is the initial single from an EP that combines the creative energies of two distinct voices from Zimbabwe’s hiphop scene, Depth and Synik, together known as Soular Rayze. Soular Rayze ushers in ‘a sunrise in the landscape of Zim rap’. The name ‘Soular Rayze’ denotes the soulful nature of the duo’s music. It also indicates the positive feel behind their music, created with a goal of ‘raising the soul’ as elevation is one of the key motivations behind their individual art. Soular Rayze represents light and use their art to inspire. The two shared a stage at a Mashoko event years ago in a performance that hinted at a possible future collaboration. Through jam sessions with Synik on acoustic guitar and Depth crafting melodies and hooks around the progressions, the idea to collaborate on a project was born.

The Odyssey EP is the debut project from Soular Rayze and it will be released in the near future. The EP will feature the production talents of Griff J dugan (Zim), Crime Heat (N.Z), Teckzilla (Nig/Can), Klasiqq (Zim) as well as numerous other producers from Zimbabwe and beyond.

Odyssey (the single) was produced by Griff J Dugan and recorded at Too Dope Records. It was engineered, mixed and mastered by Aimor. The slightly melancholic beat creates the canvas on which the two paint a picture of their individual journeys as Zimbabwean rap artists. It is ‘Grown folk business, real talk no edit’ as the two approach the track with an honesty making their words, ‘scream from the page, demanding you listen.’

All images and artwork by Shiri Champupuri

Look out for the Odyssey video directed by Shiri Champupuri coming soon.

Join Soular Rayze on their Odyssey

For bookings and more information contact us on soularrayze@gmail.com
Powered by